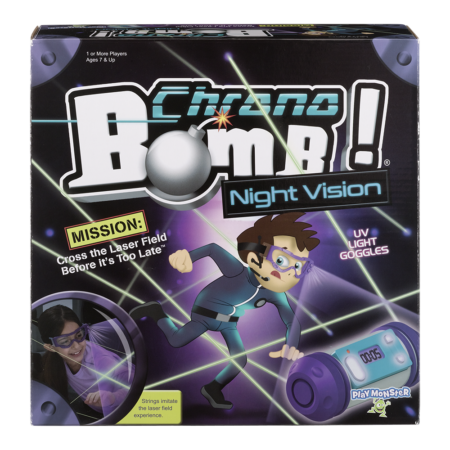 The Wildly Popular and Successful Chrono Bomb Game Can Now Be Played in the Dark with New UV Light Goggles that Make the String Glow!

BELOIT, Wis. (July 22, 2018) — PlayMonster is excited to launch Chrono Bomb Night Vision, which adds a cool spin on the active play game that originated in France and has become a favorite in the U.S. as well!

Like the original, Chrono Bomb Night Vision is a super secret spy mission where kids use the included clamps and now-longer 37-ft. string to create a “laser” field to crawl through. At the end of the maze is the bomb, counting down…tick, tick, tick! If you bump the wire as you step and crawl through the course, the time bomb will tick down faster. So, you have to hurry, carefully, and make it to the end to defuse the bomb!

This game has been a top-seller because of its fun fantasy element in which kids get to act like secret spies and heroes who save the day. It’s also active play that allows kids to get up and move around! And now there’s the new element of playing in the dark! Simply turn out the lights after creating your “laser” field and it now glows when you look at it wearing your UV light goggles! It adds excitement and a new challenge to the game!

Chrono Bomb Night Vision can still be played during the day with the lights on, just like the original…it’s just that now there are two ways to play! As always, the game can be played over and over again, building new courses each time or trying to beat your time and master your favorite setup! Available later this summer for an MSRP of $24.99. For ages 7 and up.