Stratego is the classic game of battlefield strategy that has sold over 20 million copies worldwide. For over 50 years, Stratego has thrilled strategy game fans by inspiring them to challenge an opponent and attempt to capture the flag! 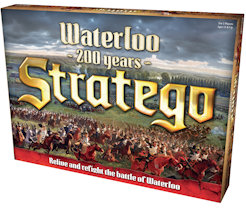 Stratego Waterloo – What’s different? This version of Stratego is a much more intricate version involving re-enactments of real historic battles. The age rage is also different at 12+ and up, instead of 8+. 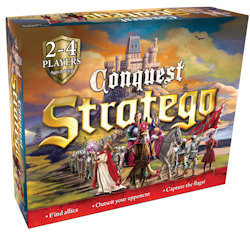 Stratego Conquest – What’s exciting about this version of Stratego is that it can be played with up to 4 players, as opposed to 2 players. This has a new theme that feels more medieval and fantastical with castles and sorcerers! Stratego Conquest is in the style of “capture the flag” with a bit of a twist: If your flag is captured, you can still play and win your flag back if there are other flags that remain on the board.

The Royal Jumbo Group develops, manufactures and sells games, puzzles and toys. It also distributes several lines for other companies in its domestic markets. Approximately 130 people work for the Jumbo Group which has its headquarters in Zaandam, Netherlands with offices in Belgium, Germany and the UK – each selling to its own market. There is also an export department which handles sales to other parts of the world. To learn more about Jumbo, please visit http://www.jumbo.eu/