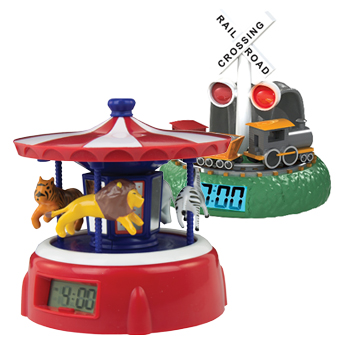 Dreamland CrossingTM begins the wakeup process with gentle train sounds, which leads to a resounding, “All aboard!” Finally, at the set time for the alarm, the action starts! The train moves along the circular track, and the lights of the signal flash. It’s a great way to wake up! Plus, if you want to see the train in action, press the button at any time!

Carousel MedleyTM starts off in the morning with playful animal sounds, then a fun carousel medley, and finally the carousel twirls and the animals move up and down. It’s a magical way to wake up, starting the day off on a positive note! Additionally, with a press of the button, you can hear the medley and see the action anytime.

Sleepyhead Animated Alarm Clocks are priced at $14.99 and make a great addition to any nightstand!

About PlayMonster LLC
Beloit, WI-based PlayMonster is a toy and game company that believes in the power of play to make a positive difference in people’s lives. Delivering great play value by designing, manufacturing and marketing innovative, fun products such as “TOTY Game of the Year” Yeti in My Spaghetti®, along with other award-winning toys and games like The Game of THINGS…®, 5 Second Rule®, Mirari®, Farkle, OK to Wake!®, My Fairy Garden®, Wonder Crew®, Automoblox® and Marbleocity® is how PlayMonster helps keep play alive for all ages.