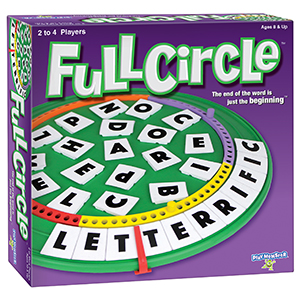 Don’t Get Too Attached to Your Word…or Your Points…the Next Player Could Sabotage You!

BELOIT, Wis. (January 28, 2019) — Word games are a staple with game lovers, and PlayMonster has an all-new one with some added features that add a new dimension to word game play! The new game, Full Circle™, will be revealed during North American International Toy Fair in New York, February 16 – 19 at booth #435.

The twist and trick of this word game is that players use the letter(s) at the end of the previous player’s word to create their own. For every one of their letters you steal, they lose one point! More advanced players can begin using strategy with the words they create, trying to make it difficult for the next player to use more than just one of their letters.

Children and families enjoy the laid-back (or strategic!) and fun word-building game, and word game fans can take it to the next level with strategic moves! Full Circle is a fun game for 2 to 4 players, ages 8+, and lands on shelves in Fall 2019.

Beloit, WI-based PlayMonster is a toy and game company that believes in the power of play to make a positive difference in people’s lives. Delivering great play value by designing, manufacturing and marketing innovative, fun products such as “TOTY Game of the Year” Yeti in My Spaghetti® and “TOTY Doll of the Year” Wonder Crew®, along with other award-winning toys and games like The Game of THINGS…®, 5 Second Rule®, Relative Insanity®, Mirari®, Farkle, OK to Wake!®, My Fairy Garden®, Automoblox®, Marbleocity®, Kid O® and Super Spinner® is how PlayMonster helps keep play alive for all ages.