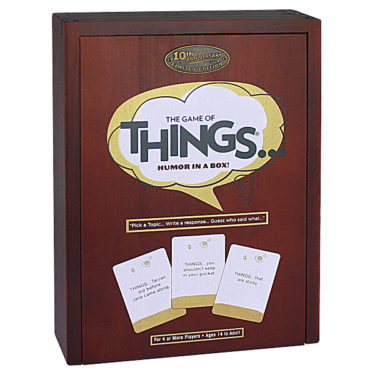 BELOIT, Wis. — THINGS… that happened 10 years ago that were HILARIOUS:
1) Will Ferrell’s movie “Anchorman- The Ron Burgundy Story” was released.
2) Janet Jackson’s wardrobe malfunctioned at the Superbowl.
3) The Game of THINGS… was unleashed on an unsuspecting public.

For 10 years now, The Game of THINGS… has changed game night from a competitive pursuit to one of uncontrollable laughter. To commemorate this, Patch Products and the game’s award-winning inventors Quinn & Sherry, Inc. have designed a 10th Anniversary Edition with all new topics like “THINGS… that end with a bang”, “THINGS… you learned from fairy tales” and “THINGS…your pets really do when you aren’t home.” These and many other hilarious topics can be found in The Game of THINGS… 10th Anniversary Edition.

This new version of the popular and humorous who-said-what game will have both old and new fans excited. The original game has proven itself a hit among those who love games that push the envelope. A multi award-winner, THINGS… has sold more than 1.5 million copies and continues to fly off store shelves across North America. The 10th Anniversary Edition features all new topics ─ and just like the original, it will have you laughing until your stomach hurts.

The game features a rich, dark cherry wood box with an attached golden medallion, and includes 288 topic cards that turn everyone into a comedian. The true object of the game is laughter, but to win, players read topics aloud, write down responses and then take turns guessing who said what. You really won’t believe the THINGS… you’ll hear!