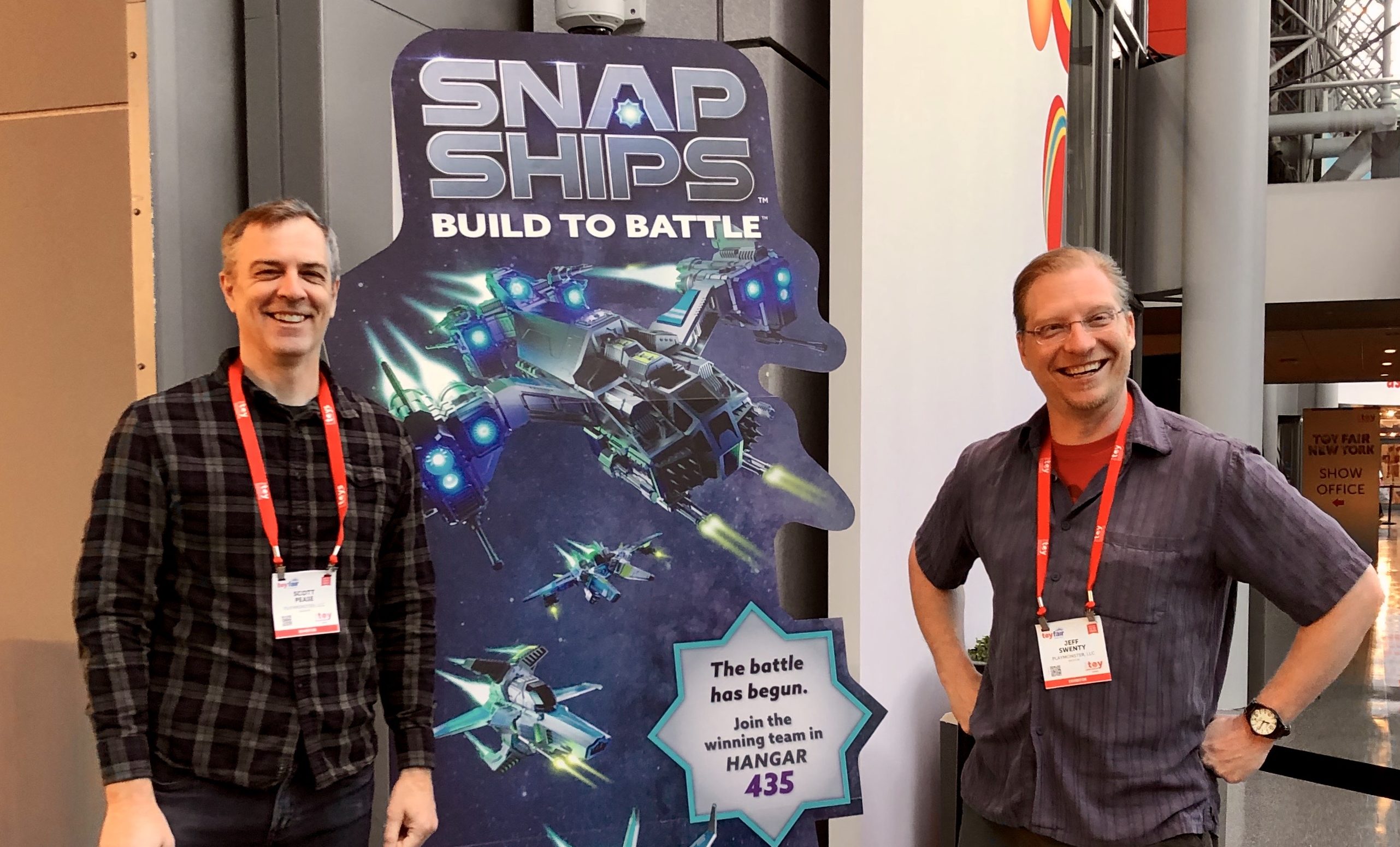 In a world where every building toy is blocky, two men came together to create something new and exciting! Scott Pease and Jeff Swenty are…the inventors of Snap Ships!

The pair met at game studio Neversoft Entertainment in 2005 and became fast friends. After spending years working on popular video game franchises like Guitar Hero and the Tony Hawk series, Scott and Jeff were ready to embark on a new journey: becoming toy inventors. Thankfully, their past experiences became a great tool for exploring the vast world of toy creation. Many of their video games featured customizable characters; Jeff and Scott recognized the allure of these customization systems and decided to combine the idea with something they both loved—spaceships.

As avid fans of science fiction novels, the duo drew design inspiration from classic book covers. “The cover art of sci-fi books from the 60s and 70s always featured a cool, unique ship,” Jeff said. “The ships looked like they were ready to go on an adventure that no one else had even dreamed of.” Some of Jeff’s key influences were the novels Ringworld and Rendezvous with Rama.

However, they also wanted Snap Ships to feel realistic. Scott said, “We try to approach Snap Ships as if they are real-working spaceships driven by a technology that could exist in the future.” The desire for realism was inspired by classic action figures. “The G.I. Joe character stats and comics written by Larry Hama were rich in realistic detail, and really fired up the imagination.”

To make Snap Ships as versatile as possible, a special interlocking-cube system was invented. The main objective was to create a connection that was flexible in creativity, so that every piece fit together without unrealistic blocky shapes, while also being strong enough to endure even the longest space expeditions. Unlike some fragile building toys, Snap Ships are meant to be played with…hard! So, a great connection between pieces was high priority.

Jeff and Scott went through several prototypes while engineering the cubes. After creating a simple prototype with only three parts, the pair worked tirelessly to perfect the unique cube-locking system. Once the pieces could strongly lock together, Jeff and Scott got creative. They designed futuristic engines, wings, blasters and more until the arsenal grew to over 100 unique ship parts.

Creating over 100 different parts was obviously a huge endeavor. Thankfully, Jeff had prior experience in model building. “I bought a 3D printer in 2012 and started learning how to 3D model so I could create a replica of a World War I tank. My largest scratch-built tank weighs about 15 pounds and consists of eighteen-hundred 3D-printed parts.” It was the knowledge gained from this hobby that launched the Snap Ships mission. “When we started to create modular spaceship pieces from scratch, I felt pretty comfortable. I knew we could design and print 3D pieces.”

All those different pieces mean there’s thousands of different combinations for spaceship building; you can build an awesome ship that means something to you! “One of the goals of the physical toy was to create a buildable ship system that was so detailed you would want to display your creation,” Jeff said. “Working in the videogame industry, you spend a lot of time with people who really decorate their workspace to personalize it. I would like to think that the toy detail is so awesome that anyone would be proud to put it on their desk!”

And, if all that wasn’t cool enough, there’s even an augmented reality app! “The app was designed from the ground up to complement the toys,” Scott said. “You can walk around your ship, get up close, and check out all the systems and components. We were able to add all kinds of extra detail on the digital side: working weapons, humming engines, blinking lights, and sounds. Details that are all there in the toys, you just might not be aware of them.”

But, that’s not all the app does. With the app you can also keep a record of your collection, find never-before-seen building guides, and have easy access to hundreds of building instructions. The inspiration for this part of the app came from Scott’s childhood. “When I was a kid, I used to have a big bin of trashed building instructions that were ripped up from overuse and hard to sort through; the app solves all of that. On your device, you have instant access to every build we’ve ever made, and you can follow along in our 3D instructions, spin the camera. It’s an endless supply of new ideas and activities.”

After starting with a small three-piece prototype, Scott and Jeff have expanded their idea into an awesome building-adventure that includes an augmented-reality app and even a YouTube series! New ship builds are being added to the app every day, and each new YouTube episode dives deeper and deeper into the story. Jeff and Scott’s spaceships have really exploded into an exciting galaxy of their own!