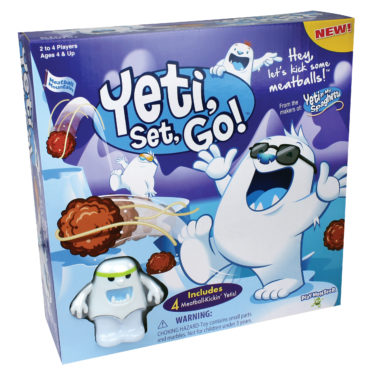 PLAYMONSTER KICKS OFF AN ALL NEW YETI GAME

Yeti, Set, Go! Follows the Popular and Award-Winning Yeti in My Spaghetti Game as the Newest Way to Have a Mountain of Fun with Yetis!

BELOIT, Wis. (June 22, 2018) – Nothing makes a kids’ game more fun that tons of action and a bunch of cool characters, which is exactly what Yeti, Set, Go! is all about!

Yeti, Set, Go! is a follow-up to PlayMonster’s award-winning Yeti in My Spaghetti®! It takes the yeti theme to a whole new level, as this game features four different Yetis with four unique personalities! It’s fun for kids to decide which Yeti they’ll “be” for the game. Players and their Yeti are a team…a mean, lean kickin’ team!

There’s big, all-play action in Yeti, Set, Go! as Yetis are kicking meatballs onto a snowy mountain! Players make their Yeti kick the balls by boppin’ them on the head over and over and over! Skill comes in to play, too, because players can aim their Yetis by swiveling them back and forth. So, meatballs are flying all over, as players try to get them to land on all of the ledges in their side of the mountain! It’s a fun, fast-paced, action-packed game for ages 4+. No batteries required. Look for it on shelves this summer for an SRP of $24.99.