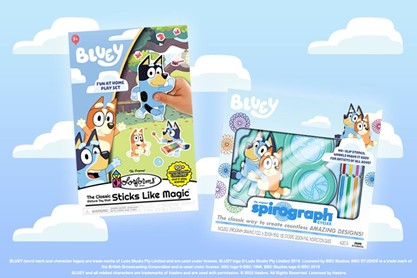 The Bluey License will come to life with Spirograph® and Colorforms®

BELOIT, Wis. (February 9, 2021) – Australia’s favorite Blue Heeler pup, Bluey, will be coming to exciting new brands in 2022, as PlayMonster announces a strategic licensing agreement with BBC Studios in 2022. Bluey has won the hearts of families around the world since it first launched in Australia in October 2018, and has quickly become a global hit. Now families in North America can share their love for Bluey with the award-winning license making its debut with Hasbro’s Spirograph® and 9 Story Brands’ Colorforms®.

New products in 2022 will include:

Spirograph has made it possible for aspiring artists to create intricate geometrical designs using STEAM principles for over 50 years, and now this iconic, award-winning brand will inspire creativity with a new generation through the Spirograph Cyclex Studio featuring Bluey! This non-slip frame and self-advancing stencil wheel makes it easy for young artists to draw intricate Spirograph designs, and now they can have Bluey and Bingo help them along the way! Each unique character-shaped tool comes with Bluey branded stickers to enhance designs and make creating art fun for the whole family.

Colorforms® repositionable sets have inspired creative expression, imaginative storytelling, and fun for over 70 years, and now a generation of preschoolers can connect with the brand through their love for Bluey! Bluey Colorforms® Boxed Playsets come with over 100 repositionable Colorforms® pieces, 2 play scenes, and idea guide featuring Bluey!

Bluey follows a loveable, inexhaustible 6-year-old Blue Heeler pup, Bluey, who lives with her Mum, Dad and her 4-year-old little sister, Bingo. The series showcases the everyday events of family life – from going to a restaurant and visiting the hairdressers to catching the bus or having a playdate – and celebrates these moments, turning ordinary experiences into extraordinary imagination-packed adventures. Bluey is produced by Ludo Studio for ABC KIDS (Australia) and co-commissioned by ABC Children’s and BBC Studios. Financed in association with Screen Australia, Bluey is proudly 100% created, written, animated, and post produced in Brisbane Queensland, Australia, with funding from the Queensland Government through Screen Queensland and the Australian Government.

BBC Studios, a global content company with British creativity at its heart, is a commercial subsidiary of the BBC. Formed in April 2018 by the merger of BBC Worldwide and BBC Studios, it spans content financing, development, production, sales, branded services, and ancillaries. BBC Studios’ award-winning British programs are internationally recognized across a broad range of genres and specialties. It has offices in 22 markets globally, including seven production bases in the UK and production bases and partnerships in a further nine countries around the world. The company, which makes over 2,500 hours of content a year, is a champion for British creativity around the world and a committed partner for the UK’s independent sector.

In the Americas, BBC Studios’ operates two production units – one in Los Angeles, responsible for ratings juggernaut and Emmy®-nominated Dancing with the Stars and multi-award-winning Life Below Zero, and the other in Brazil, where local productions Dancing Brasil and Bake Off Brasil have become breakout hits. The company manages joint venture relationships with AMC Networks for flagship channel BBC AMERICA (U.S.) – home of original series Killing Eve and global brands Dynasties, Doctor Who, and Top Gear – and with ITV for SVoD service BritBox (U.S./Canada), as well as strategic partnerships in Canada with Blue Ant Media for BBC Earth Channel and Corus for BBC Canada. The company also boasts a franchise management business and a robust linear and digital content sales and co-productions operation.

Ludo is a multi-Emmy® and Logie award-winning Australian studio that creates and produces original scripted drama, animation and digital stories that are authored by incredible local talent, distributed globally and loved by audiences everywhere. ludostudio.com.au

Hasbro (NASDAQ: HAS) is a global play and entertainment company committed to making the world a better place for all children, fans and families. Hasbro delivers immersive brand experiences for global audiences through consumer products, including toys and games; entertainment through eOne, its independent studio; and gaming, led by the team at Wizards of the Coast, an award-winning developer of tabletop and digital games best known for fantasy franchises MAGIC: THE GATHERING and DUNGEONS & DRAGONS. The company’s unparalleled portfolio of approximately 1,500 brands includes MAGIC: THE GATHERING, NERF, MY LITTLE PONY, TRANSFORMERS, PLAY-DOH, MONOPOLY, BABY ALIVE, DUNGEONS & DRAGONS, POWER RANGERS, PEPPA PIG and PJ MASKS, as well as premier partner brands. For the past decade, Hasbro has been consistently recognized for its corporate citizenship, including being named one of the 100 Best Corporate Citizens by 3BL Media and one of the World’s Most Ethical Companies by Ethisphere Institute. Important business and brand updates are routinely shared on our Investor Relations website, Newsroom and social channels (@Hasbro on Twitter, Instagram, Facebook and LinkedIn.)

ChizComm (on behalf of PlayMonster)