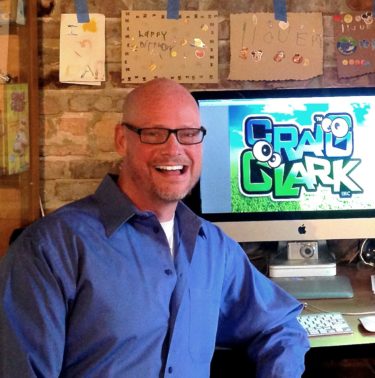 BELOIT, Wis.— Wouldn’t it be awesome to meet a fascinating game inventor and pick his brain about games and design, all while playing his newest game with him?!? Well, you can do just that, because successful toy and game inventor Craig Clark Williamson is a Chicagoan! And on November 22nd and 23rd he’ll be at the Chicago’s Toy & Game Fair at Navy Pier to play games and sign purchased copies of his new fast-paced card game Yowza!™ So come meet Craig, and play his new game before you buy it at a special show price!

Craig has spent his career in Chicagoland, working with some of the largest toy invention studios, and even managing product development for smaller companies. Craig is one of the creative minds who worked on Catch Phrase™, Gooey Louie™ and many, many more successful games! Today he runs his own company, designing and developing game and toy concepts. His recent concept licensed by Patch Products, Yowza!, is one he spent many nights working on, playing and rethinking the game to get it just right! His goal was to create an easy, fun, family-friendly card game that people will want to play again and again…and he nailed it!

Stop by Patch’s ChiTAG booth on November 22nd and 23rd to play a game or two with your Chicago neighbor Craig Clark Williamson…if you’re looking for some family fun, that is!

About Chicago Toy & Game Fair (ChiTAG)
ChiTAG, founded in 2003, is the largest toy and game fair in the U.S. open to the public. It’s popular with families, inventors, media, educators, retailers, inventors and consumers, all of which can attend to play with and shop for the latest and greatest toys and game. For more information, visit www.chitagfair.com.

About Patch Products
Patch Products is a leading designer, manufacturer and marketer of games, children’s puzzles, preschool toys, creative activities and teaching tools, with focus on innovation and growth of brands and categories. Top-selling brands include 5 Second Rule®, Perplexus™ Don’t Rock the Boat™, Farkle, The Game of THINGS…®, Mirari®, Buzzword®, Stratego®, What’s Yours Like?®, Lauri®, Wood WorX™ and Wooly Willy®.