BELOIT, Wis.— You won’t want to miss this! Patch Products is bringing their new and popular Chrono Bomb® game to ChiTAG 2015. The game will be set up for everyone to try live; a great opportunity for parents to try it before they buy it.

Chrono Bomb is a super-secret spy mission where kids use the included clamps and 27.5-ft. string to create a “laser” field to crawl through. At the end of the maze is the bomb, counting down…tick, tick, tick! If you bump the wire as you step and crawl through the course, the time bomb will tick down faster. So, you have to hurry, carefully, and make it to the end to defuse the bomb! 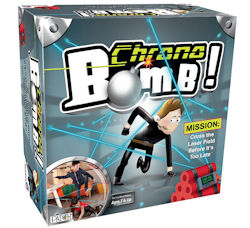 As seen with nationally known names such as:

And don’t forget about the Chrono Bomb buzz found in media from USA Today and NY1 News, to Chicago FOX 32 and Newsday. The word is spreading and this is quickly becoming the go-to holiday gift purchase, so stop by Patch’s ChiTAG booth on November 21st and 22nd to play!

ChiTAG, founded in 2003, is the largest toy and game fair in the U.S. open to the public. It’s popular with families, inventors, media, educators, retailers, inventors and consumers, all of which can attend to play with and shop for the latest and greatest toys and game. For more information, visit www.chitagfair.com.