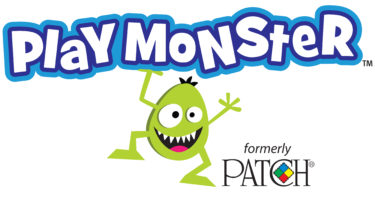 BELOIT, Wis. – February 10, 2016 – Patch Products, a leading designer, manufacturer and marketer in the toy and game industry, announced today that it is changing its corporate name to PlayMonsterTM.  The name change better reflects the company’s continued commitment to provide play for all ages.  From infants to adults, PlayMonster champions play with their expertise in providing fun, engaging and successful games and toys enjoyed by all. The company will be introducing its new name for the first time ever at this year’s Toy Fair taking place at the Javits Center on February 13-16 in New York City.

“The new name, PlayMonster, allows us to emphasize our belief in the power of play and how it makes a difference in people’s lives,” said Bob Wann, CEO (Chief PlayMonster), PlayMonster.

PlayMonster was founded as Patch Products in 1985 by brothers Fran and Bryce Patch. The company started by creating a line of children’s puzzles which would set the foundation for the company that has since grown into a leading manufacturer and marketer of award-winning games and toys that enrich the lives of the young and the young at heart. In the past several years, PlayMonster achieved many firsts, including the expansion of successful toy lines, such as Mirari® for infants and toddlers, Perplexus® and Stratego®. PlayMonster has also grown through two acquisitions of award-winning companies in just two years. In 2014, the company acquired Onaroo, known for the OK to Wake!® children’s alarm clocks and night-lights that teach kids to stay in bed until the light turns green, which helps families get more sleep. By the end of 2015, the next acquisition was made with RoominateTM, a line that has expanded the company’s offerings into the STEM (Science, Technology, Engineering and Math) category. PlayMonster will be adding new and exciting products throughout 2016, including more one-of-a-kind products such as My Fairy GardenTM.

Last year, PlayMonster ran its first TV campaign to promote Chrono Bomb®, which is a finalist for a 2016 TOTY Award for Game of the Year. This gives the company an impressive eight TOTY finalists in the last six years, a reflection of its success in bringing high-quality play to all ages. PlayMonster will continue with additional TV campaigns later this year for several more popular and new products.

“Bonding through play is a great way to strengthen relationships. It inspires people of all ages to think creatively, foster communication and brings them together in a fun and engaging way,” said Wann. “Our games and toys stand the test of time and offer a way to encourage authentic and meaningful off-line connections.”

The new name is effective immediately and will begin being implemented across the company’s products and services in the calendar year 2016 and forward.

PlayMonster is a toy and game company that believes in the power of play to make a positive difference in people’s lives. Delivering great play value by designing, manufacturing and marketing quality products like the award-winning The Game of THINGS…®, 5 Second Rule®, Mirari®, Perplexus®, Don’t Rock the BoatTM, Farkle, Chrono Bomb®, OK to Wake!®, Lauri®, Stratego®, RoominateTM and Wooly Willy® is how PlayMonster helps keep play alive for all ages.