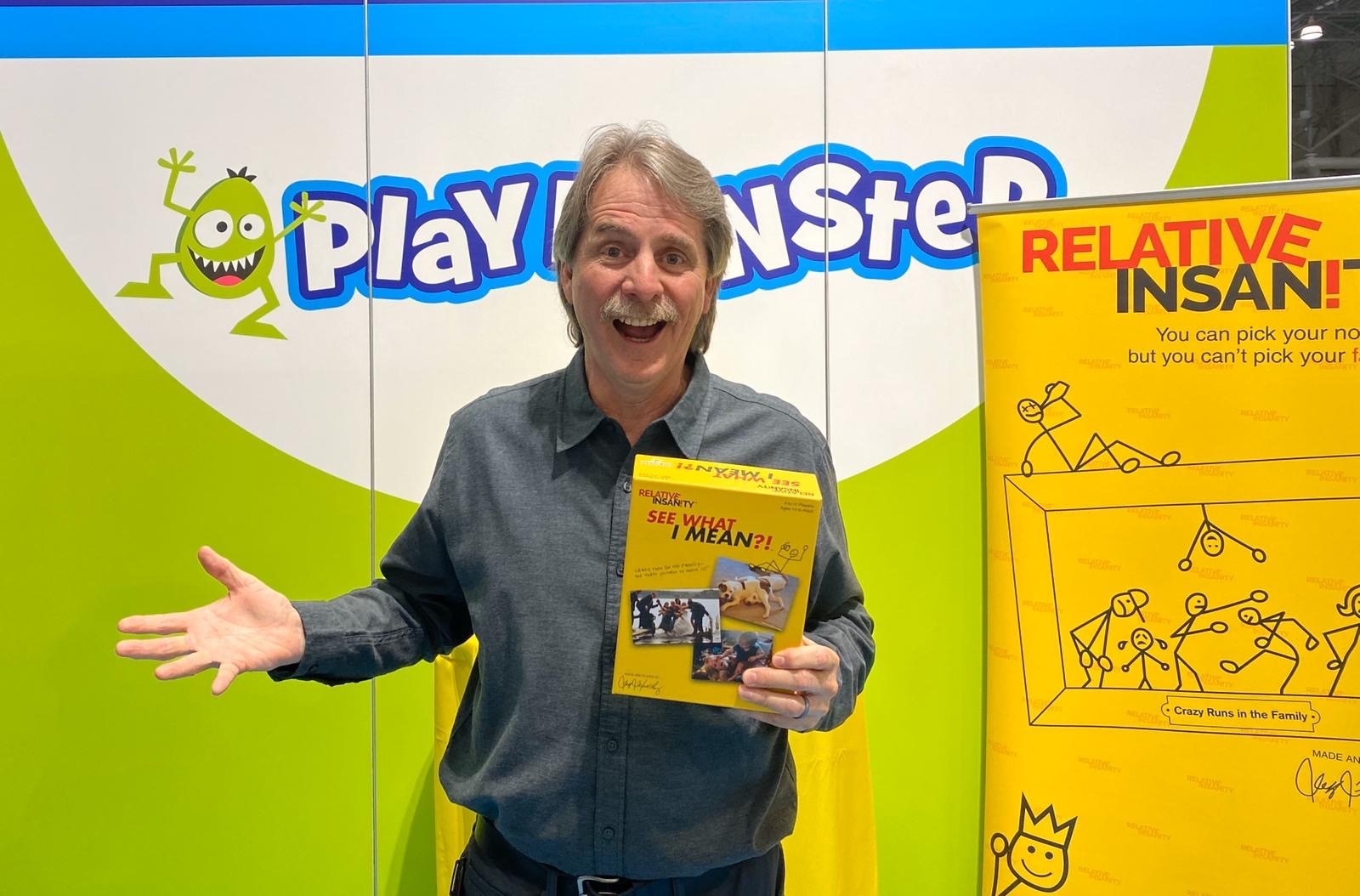 Comedian Jeff Foxworthy has a lot of accomplishments under his belt…things like books, Grammy nominations, TV shows, a great pair of jeans…but he holds nothing dearer to his heart than he does his big, loud family. And it’s apparent with his newest projects, the Relative Insanity line of games, that his family can be his inspiration!

Foxworthy first got the idea for his hilarious party games during a Thanksgiving gathering: “We have one of those families that are really close, so every year at Thanksgiving, we have about 30 family members staying at our farm—all the cousins, aunts, uncles, grandmothers—and we play games for days straight. Two years ago, I heard the ‘kids’ playing an edgy card game, but had to shoo them away because there were aunts, uncles and grandmas nearby. I told my kids that they can’t be saying those things around them. Later that night, I was thinking to myself that there’s got to be a way to play a funny game that the whole family can play without being totally offended.”

From that point, Foxworthy wrote content for his own game, the original Relative Insanity! It includes setup cards, like situations that might happen with or around family, and then a bunch of punch line cards that players use to fill in blanks or finish the setup phrase. So, the setup “We were shocked when MeeMaw said to the preacher’s wife…” and maybe you play the punchline card “Do you own a mirror?” or “I need to get my groove on.” It’s a different, laugh-out-loud game each time!

Because Jeff Foxworthy enjoys making people laugh, and has done it professionally for over 30 years, he enjoyed creating this game, and knew it would be a hit when his family played it during the next Thanksgiving gathering. Foxworthy remembered, “The results were beyond anything I could have hoped for. We laughed until we cried and a few people might have even peed… just a little bit.” Consider that a warning to “go” before you play, folks!

After the original game became a hit, Foxworthy also worked on an expansion pack with new cards that could be played on its own as a travel version, or added to the original game for MORE laughter. And then came the photos, folks! Photographic evidence of insane family moments–you know y’all have ’em–made into a game! So now, in Relative INsanity See What I Mean?!, the “setup” is a crazy picture, and everyone captions it with punchlines, “what would granny say” or what happened next! As if the photos weren’t funny enough…Foxworthy has added his comedic commentary! Oh, and there’s some pictures of Jeff himself in there, too!

Born and raised in Atlanta, Jeff Foxworthy is one of the most respected and successful comedians in the country. He is the largest selling comedy-recording artist in history, a multiple Grammy Award nominee and best-selling author of 11 books. Widely known for his Blue Collar Comedy Tour and redneck jokes, his act goes well beyond that to explore the humor in everyday family interactions and human nature. “There are a few certainties in life. One of them is everybody’s relatives are crazy,” Foxworthy said. “You can let them make you nuts too, or you can learn to just laugh about it. I prefer laughter every time!”

Foxworthy makes it his mission in life to make more people laugh than anyone on earth, and works hard to take care of his family, including his beautiful wife and daughters. Because, when it boils down to it, he’s just a guy. A guy with great jokes and a big heart. And now, a great game!