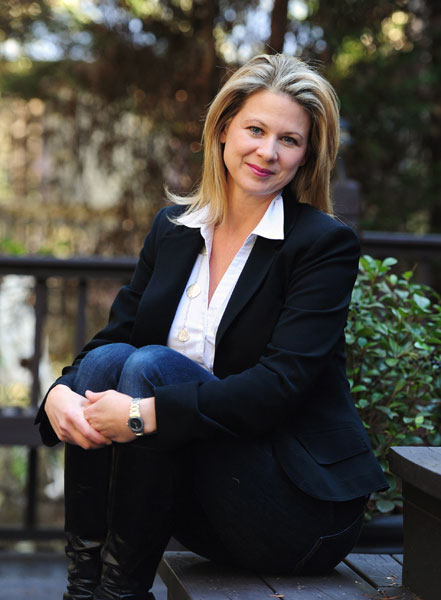 Once upon a time, there was a little girl named Aimee who lived in Bloomfield Hills, Michigan. Aimee was a lucky little girl because she got to go along with her parents to “grown-up” restaurants, hotels and gatherings. But in order to do so, she had to learn to be well-mannered at a very young age. This allowed her to be exposed to many wonderful things instead of being left at home with a babysitter!

That little girl is now Aimee Symington, CEO of Successful Kids, Inc., and creator of the Blunders® game. Symington conducts children’s etiquette workshops that are fun and interactive, allowing kids to learn and retain more. Symington believes that, like adults, learning manners is essential to their success. She can attest to that.

After graduating from the University of Michigan, Symington worked for several business consulting firms and international companies where she taught, among other things, business etiquette and international protocol. When her second child was born, she gave up the corporate life to stay home with her children. It was during that time that she started to realize how difficult it can be to teach children manners. Symington decided she would use her expertise to help children, and began her Successful Kids workshops.

Symington, after two years of conducting her workshops, decided she needed another way to reach and help children who did not have the ability to attend her workshops. She was looking for a fun and interactive way to encourage good behavior, and that’s when she developed the Blunder family! The Blunders (Billy, Brenda, Bobby and Becky) are four kids who have good and not-so-good personality traits. They need help with their manners and behavior so they can make more friends and be invited to the Mannerlys’ annual pool party extravaganza! Parents, grandparents and educators loved the Blunders, and so did kids! That was the beginning of the Blunders board game.

The colorful game board depicts the town of Blunderville, with seek-and-find items like birds, worms and footballs. The game path moves through Blunderville, with players using the Billy, Brenda, Bobby and Becky pawns. Players are following the Blunder family on a manners adventure, answering questions and trying to move along the path and be the first to be invited to the Mannerlys’ pool party. The questions are informative, with some silliness and fun sprinkled in! Kids enjoy playing along, helping their character learn manners, and in turn they learn as well!

Symington launched the game on her own, at the New York International Toy Fair. She was nervous about how the game would be received by customers, retailers and media since it was so unique. Nearly instantly, the game received ten prestigious toy and game awards, gaining respect and recognition. One of Symington’s favorite moments was when Kathie Lee Gifford chose Blunders as her “Favorite Thing” on the Today Show. She recalls that, “At that moment, I knew that all of my hard work had finally paid off.” Symington was also fueled by letters from customers, such as one she remembers from the father of a boy with Asperger syndrome. In the letter, he told her that Blunders had helped teach his son how to behave in social situations, which contributed to him doing better in school and having more friends. Symington says, “I feel so blessed to have helped even just this one child.”

After a short while of distributing the game on her own, Symington decided she wanted to spend more time creating fun games and products, and less time in the office doing paperwork. She wanted Blunders to continue thriving, so she gave PlayMonster licensing rights to sell and market the game, as well as future additions to the Blunders family! Symington and PlayMonster are working together to develop other Blunders products.

Now Symington is living happily ever after in Davidson, North Carolina, with her husband George, daughter Emma and son Luke. She also has a golden doodle puppy named Cooper, and teaching him manners has been her greatest challenge yet!

To set up an interview with Aimee Symington, please contact uscreate new email.